Labour and the Sun’s Front Page About Mental Health

The front page of today’s Sun has already been debunked well by Buzzfeed and The Telegraph [update: see also The Conversation], condemned by the Labour Party here and here and it looks particularly stupid when compared to the thoughtful report by Victim Support (‘people with mental health problems experienced high rates of crime, and were  considerably more likely to be victims of crime than the general population’).

So, I will just focus on one aspect of the post-war history of mental health policy. It is going to sound party political, but there is a wider cautionary tale about the potential for governments to exploit these kinds of media messages for short term gain. This sort of stigma-reinforcing headline is not new. It was often countered, quite quietly, in government. For most of the post-war period, it worked in a consensus-seeking way with medical and mental health groups to update mental health legislation (in 1959 and 1983). Then came the Labour Government in 1997 committed to being tough on crime, trying to be the party for public safety, and responding to this sort of message (and high profile murders). It oversaw the creation of a term – DSPD (Dangerous Severe Personality Disorder) – and sought, through legislation, the ability to detain people before they committed violent crimes. The plan was opposed by the vast majority of mental health organisations and created a ten-year stand-off which was never resolved in a satisfactory way.   The potential bright side here is that the Sun headline has produced a strong reaction from Labour against mental health stigma. That might be enough to stop history repeating itself if Labour wins the next election.

For more on the history of MH legislation, see this article here (£) or here (not £)) 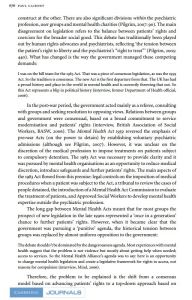