The Scottish Government and the ‘Scottish approach’ to policymaking’ #POLU9SP

A ‘Scottish approach’ to policymaking can refer to two things. The first is an academic description of the ‘Scottish policy style’, in a lot of the academic literature, which describes the Scottish Government’s reputation for two practices:

The second is called the ‘Scottish Approach to Policymaking’ (SATP) by the Scottish Government. It largely describes its approach to ‘governance’, which developed from 1999 but appeared to change markedly in 2007 and 2013.

See Greer and Jarman for an interesting account of the period from 1999-2007, which I summarize here: 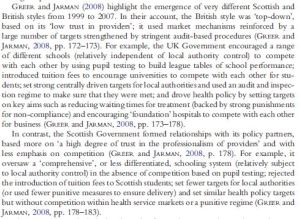 My summary of the post-2007 developments draws on accounts by the former and current Permanent Secretary (the most senior civil servant) of the Scottish Government: John Elvidge’s Northern Exposure and Peter Housden’s ‘This is us’.

The ‘Scottish Approach to Policymaking’

An early version of the ‘Scottish approach’ developed before 2007. Elvidge (2011: 31-5) describes a ‘Scottish model of government’, linked to the potential to exploit its relatively small size, and central position in a dense network of public sector and third sector bodies, to pursue ‘holistic’ government, in which ministers – and their equivalents in the civil service – had briefs which spanned traditional departmental divides and came together regularly to coordinate national strategies.

Elvidge (2011: 31) describes ‘the concept of a government as a single organisation’ and “the idea of ‘joined up government’ taken to its logical conclusions”. He links this agenda to his belief that ‘traditional policy and operational solutions’ based on ‘the target driven approach which characterised the conduct of the UK Government’ would not produce the major changes in policy and policymaking required to address major problems such as health and educational inequalities and low economic growth. Instead, they required:

more integrated approaches, such as the approach to the early years of children’s lives … which looked across the full range of government functions [and] offered the scope for some significant and unexpected fresh policy perspectives (2011: 32).

Elvidge (2011: 32) suggests that this approach took off under the SNP-led Scottish Government, elected in May 2007, partly because his ideas on joined up government complemented the SNP’s:

manifesto commitments to: i) an outcome based approach to the framing of the objectives of government and to enabling the electorate to hold the Government to account for performance; ii) a reduced size of Cabinet, which was an expression of a commitment to an approach to Ministerial responsibilities that emphasised the collective pursuit of shared objectives over a focus on individual portfolios with disaggregated objectives.

By 2007, the ‘Scottish approach’ combined the pursuit of joined up government with the SNP’s ‘outcomes based approach to delivering the objectives of government’, a ‘single statement of purpose, elaborated into a supporting structure of a small number of broad objectives and a larger, but still limited, number of measurable national outcomes’ (2011: 34).

The Scottish Government introduced a government-wide policy framework, the National Performance Framework (NPF), based on a single ‘ten year vision’ and a shift towards measuring success in terms of often-long term outcomes. The NPF has a stated ‘core purpose – to create a more successful country, with opportunities for all of Scotland to flourish, through increasing sustainable economic growth’. It seeks to turn this broad purpose into specific policies and measures of success in two main ways.

These objectives are mapped onto sixteen ‘National Outcomes’ and fifty ‘National Indicators’.

Second, it works in partnership with the public sector to align organisational objectives with the NPF. In some cases, this involves public sector reform and/or some attempts at centralisation: it obliged non-departmental public bodies (NDPBs, or ‘quangos’) to align their objectives with the NPF, after reducing their number, and it created a single police force and single fire service.

In the case of local authorities, its approach was different. It required them to produce ‘Single Outcomes Agreements’ (SOAs), in partnership with their stakeholders (and public sector partners), but with local government discretion to determine the balance between a range of priorities as long as their outcomes were consistent with the NPF’s vision.

The Scottish Government reinforced this sense of discretion by signing a Concordat with COSLA which contained a package of Scottish Government aims, but also its agreement to halve the amount of ‘ring fenced’ budgets (from 22% to 11%) and reject a tendency to ‘micromanage’ local government – albeit within the context of a system in which the Scottish Government controls almost all of local authorities’ total budgets (we can discuss this in the next lecture).

Since 2013, the Scottish Government has sought to reinforce the ‘Scottish approach’ with reference to three broad principles:

According to Elvidge and Housden, this approach contrasts markedly with UK policymaking and, in particular, the UK Labour Government’s approach from 1997 (as described by Greer and Jarman, above).

In the lecture, I will try to describe these developments and principles, and we can discuss the extent to which they are specific enough (in other words, not too vague, and specific to Scottish policymaking) to describe a distinctively ‘Scottish approach’. For example, don’t other bodies care about coproduction?