Scottish policymaking in the context of multi-level governance #POLU9SP

This is the first of two lectures in which we consider MLG, as the diffusion of power from central government to other governments and non-government actors, and IGR, as the ways in which those governments share power and cooperate. These concepts can represent two different ways to study the same thing: MLG often describes fluid and unpredictable policy processes, while IGR often focuses on formal powers, the role of institutions, and the resolution of disputes. Referring to MLG and IGR, the subsequent two lectures examine Scottish public expenditure (and the ‘Barnett formula’) and the likely effect of the new Scotland Act.

When I describe multi-level governance (MLG) in the UK, I contrast it with the ‘Westminster model’. The comparison allows us to identify a diffusion of power in two ways:

An initial focus on the UK allows us to challenge (again) the idea that its policy process is ‘majoritarian’, in which power is concentrated at the centre, and governments tend to make policy in a ‘top down’ and uncompromising way. Our previous discussions of policy networks/ communities/ styles already helped us question this image and the idea that its political system contrasts with Scotland’s alleged ‘consensus democracy’. A focus on MLG reinforces this argument, by identifying a tendency of many governments to share power and policymaking responsibility with other actors in and out of government.

So, imagine MLG as the formation of policy networks that span more than one level of government, and the ‘emergence’ of policies and practices from multi-level activity. It is important to identify which actors are responsible for those outcomes in theory, to inform discussions of accountability, but difficult to know who to blame in practice when there are blurry boundaries between the actors who make or influence policy.

As we discuss next week, this problem may be exacerbated by further constitutional change, which is built on a level of shared responsibility, between the UK and Scottish Government, not envisaged in the original devolution ‘settlement’.

Multi-level policymaking: the division of responsibilities

For now, let’s start with the original settlement, set out in the Scotland Act 1998, which stated which policy areas would remain reserved to the UK Government (why does it matter if the legislation sets out reserved or devolved responsibilities?). Reserved areas are in the left hand column, which allows us to work out the main responsibilities of the Scottish Government (which it inherited largely from the old Scottish Office – devolution did not prompt a major review of its responsibilities). In the middle are some examples of UK/ Scotland overlaps, followed by examples of policy issues that are devolved and ‘Europeanised’. 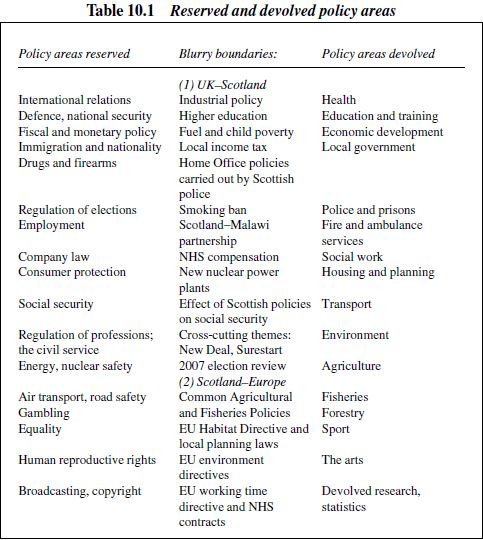 If we simply compare the left/ right columns, the divisions seem fairly clear. Indeed, compared to many other systems – in which, for example, national and regional governments might share control over healthcare or education – they are.

Yet, many policy areas were becoming controlled or influenced increasingly by the European Union as they were being devolved. Further, the UK Government is the Member State, with three main implications:

Outside of the obvious areas, such as EU rules on free trade and the free movement of people, the most Europeanised and devolved areas tend to be in:

Then, there is a miscellany of EU advice and regulations with the potential to have a major impact on otherwise devolved policies. For example, the ‘working time directive’ (do you know the details?) has an impact on doctors’ working conditions, while the habitat directive impacts on planning processes. This is on top of a more general sense that EU rules on trade and the free movement of people have a major impact on any policy area.

The blurry boundaries between reserved and devolved issues

There are many examples of areas in which at least two levels of government are involved. In some cases, this potential for multi-level involvement produced uncertainty about how to act:

In some cases, there were tensions about the overlaps of responsibilities:

In others, an overlap of responsibilities seems inevitable, since many policy areas are ‘cross-cutting’; they involve many policy instruments and government departments:

In other words, overlaps are inevitable when any government tries to combine devolved discretion with national control. In the next lecture we can discuss how the UK and Scottish Governments dealt with these overlaps.