In the Scottish Parliament election, the only clear majority was secured by men

The number of women in the Scottish Parliament used to depend strongly on the fate of Scottish Labour: the high point of 40% in 2003 was on the back of 28 Labour MSPs representing 56% of its group and accounting for 55% of women MSPs (Cairney and McGarvey, 2013: 106; Cairney et al, 2015). At the time, it was the only party to ‘twin’ constituencies and alternate women/ men candidates on the regional list (Mackay and Kenny, 2007: 86-7).

Other parties pursued less systematic or effective measures: the Liberal Democrats’ were ‘half hearted’ (Kenny and MacKay, 2013: 8; Cairney, 2011, 30); the SNP had ‘an informal rule of thumb that [regional] lists should be more-or less gender balanced’ (Mackay and Kenny, 2007: 87), the Conservatives sometimes ensured that women ‘were generally placed in favourable positions on the party lists’, and the Greens alternated men and women on party lists with uncertain effect (Kenny and MacKay, 2013: 9).

Now, as Labour’s fortunes have dropped, the decision by the SNP to use stronger measures – including All Women Shortlists for seats vacated by retiring MSPs – seems particularly important (Kenny and Mackay, 2013; Kenny, 2015; Swann, 2016a; on the substantive representation of women, see Engender 2016a; 2016b).

Source: adapted and updated (using figures from Gender Politics, 2016 and Swann, 2016b) from Cairney et al (2015: 9). Table does not include ‘other’ parties/ independents. 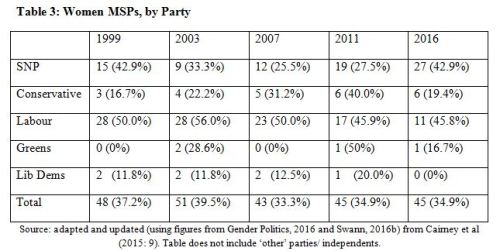 Apologies for the Harvard versus weblink referencing. This is a short section  copy/pasted from an article  that I am writing for Scottish Affairs (to be published in August 2016). You can find the full paper here:  Cairney 2016 Scottish Parliament election 2016 in Scottish Affairs 11.5.16