Why don’t policymakers listen to your evidence?

Since 2016, my most common academic presentation to interdisciplinary scientist/ researcher audiences is a variant of the question, ‘why don’t policymakers listen to your evidence?’

1. Many policymakers have many different ideas about what counts as good evidence

Few policymakers know or care about the criteria developed by some scientists to describe a hierarchy of scientific evidence. For some scientists, at the top of this hierarchy is the randomised control trial (RCT) and the systematic review of RCTs, with expertise much further down the list, followed by practitioner experience and service user feedback near the bottom.

Yet, most policymakers – and many academics – prefer a wider range of sources of information, combining their own experience with information ranging from peer reviewed scientific evidence and the ‘grey’ literature, to public opinion and feedback from consultation.

While it may be possible to persuade some central government departments or agencies to privilege scientific evidence, they also pursue other key principles, such as to foster consensus driven policymaking or a shift from centralist to localist practices.

Consequently, they often only recommend interventions rather than impose one uniform evidence-based position. If local actors favour a different policy solution, we may find that the same type of evidence may have more or less effect in different parts of government.

2. Policymakers have to ignore almost all evidence and almost every decision taken in their name

Many scientists articulate the idea that policymakers and scientists should cooperate to use the best evidence to determine ‘what works’ in policy (in forums such as INGSA, European Commission, OECD). Their language is often reminiscent of 1950s discussions of the pursuit of ‘comprehensive rationality’ in policymaking.

The key difference is that EBPM is often described as an ideal by scientists, to be compared with the more disappointing processes they find when they engage in politics. In contrast, ‘comprehensive rationality’ is an ideal-type, used to describe what cannot happen, and the practical implications of that impossibility.

The ideal-type involves a core group of elected policymakers at the ‘top’, identifying their values or the problems they seek to solve, and translating their policies into action to maximise benefits to society, aided by neutral organisations gathering all the facts necessary to produce policy solutions. Yet, in practice, they are unable to: separate values from facts in any meaningful way; rank policy aims in a logical and consistent manner; gather information comprehensively, or possess the cognitive ability to process it.

Instead, Simon famously described policymakers addressing ‘bounded rationality’ by using ‘rules of thumb’ to limit their analysis and produce ‘good enough’ decisions. More recently, punctuated equilibrium theory uses bounded rationality to show that policymakers can only pay attention to a tiny proportion of their responsibilities, which limits their control of the many decisions made in their name.

More recent discussions focus on the ‘rational’ short cuts that policymakers use to identify good enough sources of information, combined with the ‘irrational’ ways in which they use their beliefs, emotions, habits, and familiarity with issues to identify policy problems and solutions (see this post on the meaning of ‘irrational’). Or, they explore how individuals communicate their narrow expertise within a system of which they have almost no knowledge. In each case, ‘most members of the system are not paying attention to most issues most of the time’.

This scarcity of attention helps explain, for example, why policymakers ignore most issues in the absence of a focusing event, policymaking organisations make searches for information which miss key elements routinely, and organisations fail to respond to events or changing circumstances proportionately.

In that context, attempts to describe a policy agenda focusing merely on ‘what works’ are based on misleading expectations. Rather, we can describe key parts of the policymaking environment – such as institutions, policy communities/ networks, or paradigms – as a reflection of the ways in which policymakers deal with their bounded rationality and lack of control of the policy process.

Scientists often appear to be drawn to the idea of a linear and orderly policy cycle with discrete stages – such as agenda setting, policy formulation, legitimation, implementation, evaluation, policy maintenance/ succession/ termination – because it offers a simple and appealing model which gives clear advice on how to engage.

Indeed, the stages approach began partly as a proposal to make the policy process more scientific and based on systematic policy analysis. It offers an idea of how policy should be made: elected policymakers in central government, aided by expert policy analysts, make and legitimise choices; skilful public servants carry them out; and, policy analysts assess the results with the aid of scientific evidence.

Yet, few policy theories describe this cycle as useful, while most – including the advocacy coalition framework , and the multiple streams approach – are based on a rejection of the explanatory value of orderly stages.

Policy theories also suggest that the cycle provides misleading practical advice: you will generally not find an orderly process with a clearly defined debate on problem definition, a single moment of authoritative choice, and a clear chance to use scientific evidence to evaluate policy before deciding whether or not to continue. Instead, the cycle exists as a story for policymakers to tell about their work, partly because it is consistent with the idea of elected policymakers being in charge and accountable.

Some scholars also question the appropriateness of a stages ideal, since it suggests that there should be a core group of policymakers making policy from the ‘top down’ and obliging others to carry out their aims, which does not leave room for, for example, the diffusion of power in multi-level systems, or the use of ‘localism’ to tailor policy to local needs and desires.

What can you do when policymakers ignore your evidence?

The politics of evidence-based policymaking

The politics of evidence-based policymaking: maximising the use of evidence in policy

How to communicate effectively with policymakers

Democratic governance is defined by the regular rotation of elected leaders. Amidst the churn, the civil service is expected to act as the repository of received wisdom about past policies, including assessments of what works and what doesn’t. The claim is that to avoid repeating the same mistakes we need to know what happened last time and what were the effects. Institutional memory is thus central to the pragmatic task of governing.

What is institutional memory? And, how is it different to policy learning?

Despite increasing recognition of the role that memory can or should play in the policy process, the concept has defied easy scholarly definition.

In the classic account, institutional memory is the sum total of files, procedures and knowledge held by an organisation. Christopher Pollitt, who has pioneered the study of institutional memory, refers to the accumulated knowledge and experience of staff, technical systems, including electronic databases and various kinds of paper records, the management system, and the norms and values of the organizational culture, when talking about institutional memory. In this view, which is based on the key principles of the new institutionalism, memory is essentially an archive.

The problem with this definition is that it is hard to distinguish the concept from policy learning (see also here). If policy learning is in part about increasing knowledge about policy, including correcting for past mistakes, then we could perhaps conceive of a continuum from learning to memory with an inflection point where one starts and the other stops. But, this is easier to imagine than it is to measure empirically. It also doesn’t acknowledge the forms memories take and the ways memories are contested, suppressed and actively forgotten.

In our recent contribution to this debate (see here and here) we define memories as ‘representations of the past’ that actors draw on to narrate what has been learned when developing and implementing policy. When these narratives are embedded in processes they become ‘institutionalised’. It is this emphasis on embedded narratives that distinguishes institutional memory from policy learning. Institutional memory may facilitate policy learning but equally some memories may prohibit genuine adaptation and innovation. As a result, while there is an obvious affinity between the two concepts it is imperative that they remain distinct avenues of inquiry. Policy learning has unequivocally positive connotations that are echoed in some conceptualisations of institutional memory (i.e. Pollitt). But, equally, memory (at least in a ‘static’ form) can be said to provide administrative agents with an advantage over political principals (think of the satirical Sir Humphrey of Yes Minister fame). The below table seeks to distinguish between these two conceptualisations of institutional memory:

The scholar who has done the most to advance our understanding of institutional memory in government is Christopher Pollitt. His main contention is that institutional memory has declined over recent decades due to: the high rotation of staff in the civil service, changes in IT systems which prevent proper archiving, regular organisational restructuring, rewarding management skills above all others, and adopting new management ‘fads’ that favour constant change as they become popular. This combination of factors has proven to be a perfect recipe for the loss of institutional memory within organisations.  The result is a contempt for the past that leads to repeated policy failure.

We came to a different view. Our argument is that one of the key reasons why institutional memory is said to have declined is that it has been conceptualised in a ‘static’ manner more in keeping with an older way of doing government. This practice has assumed that knowledge on a given topic is held centrally (by government departments) and can be made explicit for the purpose of archiving. But, if government doesn’t actually work this way (see relevant posts on networks here) then we shouldn’t expect it to remember this way either. Instead of static repositories of summative documents holding a singular ‘objective’ memory, we propose a more ‘dynamic’ people-centred conceptualisation that sees institutional memory as a composite of intersubjective memories open to change. This draws to the fore the role of actors as crucial interpreters of memory, combining the documentary record with their own perspectives to create a story about the past. In this view, institutional memory has not declined, it is simply being captured in a fundamentally different way. 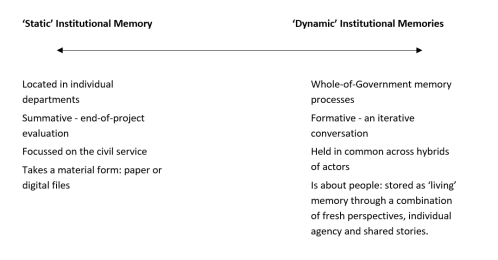 Key debates: How can an institution improve how it remembers?

How an institution might improve its memory is intrinsically linked to how memory is defined and whether or not it is actually in decline. If we follow Pollitt’s view that memory is about the archive of accumulated knowledge that is being ignored or deliberately dismantled by managerialism then the answer involves returning to an older way of doing government that placed a higher value on experience. By putting a higher value on the past as a resource institutions would reduce staff turnover, stop regular restructures and changes in IT systems, etc. For those of us who work in an institution where restructuring and IT changes are the norm, this solution has obvious attractions. But, would it actually improve memory? Or would it simply make it easier to preserve the status quo (a process that involves actively forgetting disruptive but generative innovations)?

Our definition, relying as it does on a more dynamic conceptualisation of memory, is sceptical about the need to improve practices of remembering. But, if an institution did want to remember better we would favour increasing the opportunity for actors within an institution to reflect on and narrate the past. One example of this might be a ‘Wikipedia’ model of memory in which the story of a policy, it success and failure, is constructed by those involved, highlighting points of consensus and conjecture.