Please see the Policy Analysis in 750 words series overview before reading the summary (and click here for the full list of authors). This post is a mere 500 words over budget (not including these words describing the number of words). 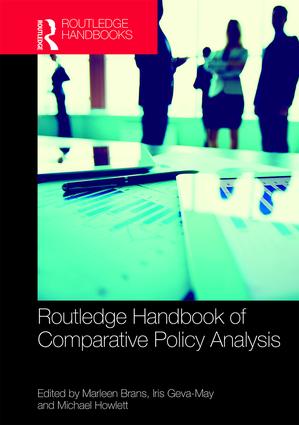 ‘The Handbook … covers … the state of the art knowledge about the science, art and craft of policy analysis in different countries, at different levels of government and by all relevant actors in and outside government who contribute to the analysis of problems and the search for policy solutions’ (Brans et al, 2017: 1).

Brans et al’s (2017: 1-6) opening discussion suggests that this task is rather unclear and complicated. They highlight the wide range of activity described by the term ‘policy analysis’:

Analysts can be found in many levels and types of government, in bodies holding governments to account, and outside of government, including interest groups, think tanks, and specialist firms (such as global accountancy or management consultancy firms – Saint-Martin, 2017).

Further, ‘what counts’ as policy analysis can relate to the people that do it, the rules they follow, the processes in which they engage, the form of outputs, and the expectations of clients (Veselý, 2017: 103; Vining and Boardman, 2017: 264).

The process of policy analysis – such as to gather and analyse information, define problems, design and compare solutions, and give policy advice – includes ‘applied social and scientific research as well as more implicit forms of practical knowledge’, and ‘both formal and informal professional practices’ (see also studies of institutions and networks).

It is difficult to identify a straightforward process in which analysts are clearly engaged in multiple, well-defined ‘stages’ of policymaking.

The idea of policy analysis principles – ‘of transparency, effectiveness, efficiency and accountability through systematic and evidence-based analysis’ – may be entrenched in places like the US but not globally.

In some political systems (particularly in the ‘Anglo-Saxon family of nations’), the most-described forms of policy analysis (in the 750 words series) may be taken for granted (2017: 4):

Even so, the status of science and expertise is often contested, particularly in relation to salient and polarised issues, or more generally:

In many political systems, there may be less criticism of the idea of ‘systematic and evidence-based analysis’ because there less capacity to process information. It is difficult to worry about excessively technocratic approaches if they do not exist (a point that CW made to me just before I read this book).

We may wonder if ‘policy analysis’ can ever be based on common skills and methods (such as described by Scott, 2017, and in Weimer and Vining), connected to ‘formal education and training’, a ‘a code of professional conduct’, and the ability of organisations to control membership (Adachi, 2017: 28; compare with Radin and Geva-May).

Policy analysis may, instead, be considered a collection of ‘styles’ (Hassenteufel and Zittoun, 2017), influenced by:

Policy analysis can also describe a remarkably wide range of activity, including:

Put simply, we should not assume that graduates in ‘policy analysis’ will enter a central government with high capacity, coherent expectations, and a clear demand for the same basic skills. Yet, Fukuyama argues that US University programmes largely teach students:

‘a battery of quantitative methods … applied econometrics, cost-benefit analysis, decision analysis, and, most recently, use of randomized experiments for program evaluation’ that ‘will tell you what the optimal policy should be’, but not ‘how to achieve that outcome. The world is littered with optimal policies that don’t have a snowball’s chance in hell of being adopted’.

In that context, additional necessary skills include: stakeholder mapping, to identify who is crucial to policy success, defining policy problems in a way that stakeholders and policymakers can support, and including those actors continuously during a process of policy design and delivery. These skills are described at more length by Radin and Geva May, while Botha et al (2017) suggest that the policy analysis programmes (across North American and European Universities) offer a more diverse range of skills (and support for experiential learning) than Fukuyama describes.