This page brings together my work on ‘evidence-based policymaking’, including a book The Politics of Evidence-Based Policy Making, some journal articles, and many posts including The Science of Evidence-based Policymaking: How to Be Heard. Please scroll down to see the main argument and links to further reading (including a free pre-publication version of my book) and click Evidence to see a forthcoming series of articles on evidence and policy. 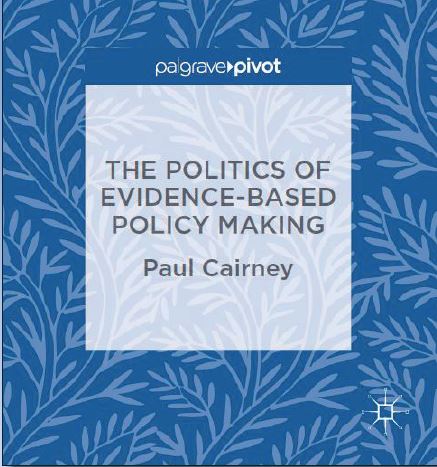 “Cairney wisely navigates between the naïve peddlers of ‘evidence-based policy’, and the grumpy cynics who think such an endeavour is hopeless.  The book gives some much needed insights into the psychology, political theory and cognitive biases of decision-making. It’s essential reading for anybody with a practical interest in seeing evidence have – at the very least- a foot in the policymaker’s door” Jonathan Breckon, Head of Alliance for Useful Evidence

Policymakers are not willing or able to consider all evidence relevant to policy problems. Instead, they employ two shortcuts: ‘rational’, by pursuing clear goals and prioritizing certain kinds and sources of information, and ‘irrational’, by drawing on emotions, gut feelings, deeply held beliefs, and habits to make decisions quickly.

This action takes place in a complex policymaking system in which policymaker attention can lurch from issue to issue, policy is made routinely in subsystems, and the ‘rules of the game’ take time to learn.

Many studies focus only on the first short cut. They identify the problem of uncertainty that arises when policymakers have incomplete information, and seek to solve it by improving the supply of information and encouraging academic-practitioner networks and workshops.

They ignore the importance of a wider process of debate, coalition formation, lobbying, and manipulation, to reduce ambiguity and establish a dominant way to ‘frame‘ policy problems. While scientific evidence cannot solve the problem of ambiguity, persuasion and framing can help determine the demand for scientific evidence.

Therefore, the second solution is to work out how best to engage in a process of framing and persuasion by, for example, forming coalitions with actors with the same aims or beliefs, and combining scientific information with simple stories to exploit or adapt to the emotional and ideological biases of policymakers.

This is less about packaging information to make it simpler to understand, and more about responding to the ways in which policymakers think and, therefore, how they demand information.

In the book, I present this argument in three steps:

My conclusion has profound implications for the role of research and scientific experts in policymaking. Scientists have a stark choice: to produce information and accept that it will have a limited impact (but that scientists will maintain an often-useful image of objectivity), or to go beyond one’s comfort zone, and expertise, to engage in a normative enterprise that can increase impact at the expense of objectivity.

You can read a summary of these issues here, which includes a brief lecture:

Here is my talk (2 parts) on EBPM at the School of Public Affairs, University of Colorado Denver 24.2.16 (or download the main talk and Q and A):

The full pre-submission draft of the book is here: 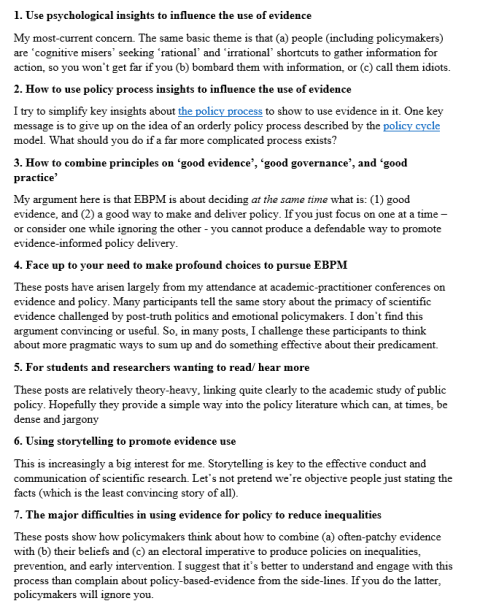 1. Use psychological insights to influence the use of evidence

My most-current concern. The same basic theme is that (a) people (including policymakers) are ‘cognitive misers’ seeking ‘rational’ and ‘irrational’ shortcuts to gather information for action, so you won’t get far if you (b) bombard them with information, or (c) call them idiots.

Using psychological insights in politics: can we do it without calling our opponents mental, hysterical, or stupid? (yes)

The Psychology of Evidence Based Policymaking: Who Will Speak For the Evidence if it Doesn’t Speak for Itself? (older paper, linking studies of psychology with studies of EBPM)

Older posts on the same theme:

Is there any hope for evidence in emotional debates and chaotic government? (yes)

How can we close the ‘cultural’ gap between the policymakers and scientists who ‘just don’t get it’?

2. How to use policy process insights to influence the use of evidence

I try to simplify key insights about the policy process to show to use evidence in it. One key message is to give up on the idea of an orderly policy process described by the policy cycle model. What should you do if a far more complicated process exists?

The Politics of Evidence Based Policymaking: 3 messages (3 ways to say that you should engage with the policy process that exists, not a mythical process that will never exist)

Why doesn’t evidence win the day in policy and policymaking? and What does it take to turn scientific evidence into policy? Lessons for illegal drugs from tobacco and There is no blueprint for evidence-based policy, so what do you do? (3 posts describing the conditions that must be met for evidence to ‘win the day’)

Writing for Impact: what you need to know, and 5 ways to know it (explains how our knowledge of the policy process helps communicate to policymakers)

Evidence Based Policy Making: 5 things you need to know and do (presentation to Open Society Foundations New York 2016)

What 10 questions should we put to evidence for policy experts? (part of a series of videos produced by the European Commission)

3. How to combine principles on ‘good evidence’, ‘good governance’, and ‘good practice’

My argument here is that EBPM is about deciding at the same time what is: (1) good evidence, and (2) a good way to make and deliver policy. If you just focus on one at a time – or consider one while ignoring the other – you cannot produce a defendable way to promote evidence-informed policy delivery.

We all want ‘evidence based policy making’ but how do we do it? (presentation to the Scottish Government on 2016)

The politics of implementing evidence-based policies

What Works (in a complex policymaking system)?

How Far Should You Go to Make Sure a Policy is Delivered?

4. Face up to your need to make profound choices to pursue EBPM

These posts have arisen largely from my attendance at academic-practitioner conferences on evidence and policy. Many participants tell the same story about the primacy of scientific evidence challenged by post-truth politics and emotional policymakers. I don’t find this argument convincing or useful. So, in many posts, I challenge these participants to think about more pragmatic ways to sum up and do something effective about their predicament.

Political science improves our understanding of evidence-based policymaking, but does it produce better advice? (shows how our knowledge of policymaking clarifies dilemmas about engagement)

How far should you go to secure academic ‘impact’ in policymaking? From ‘honest brokers’ to ‘research purists’ and Machiavellian manipulators (you have to make profound ethical and strategic choices when seeking to maximise the use of evidence in policy)

Principles of science advice to government: key problems and feasible solutions (calling yourself an ‘honest broker’ while complaining about ‘post-truth politics’ is a cop out)

I know my audience, but does my other audience know I know my audience? (compares the often profoundly different ways in which scientists and political scientists understand and evaluate EBPM – this matters because, for example, we rarely discuss power in scientist-led debates)

Is Evidence-Based Policymaking the same as good policymaking? (no)

Realistic ‘realist’ reviews: why do you need them and what might they look like? (if you privilege impact you need to build policy relevance into systematic reviews)

5. For students and researchers wanting to read/ hear more

These posts are relatively theory-heavy, linking quite clearly to the academic study of public policy. Hopefully they provide a simple way into the policy literature which can, at times, be dense and jargony.

Can you want evidence based policymaking if you don’t really know what it is? (defines each word in EBPM)

Can you separate the facts from your beliefs when making policy? (no, very no)

What is ‘Complex Government’ and what can we do about it? (read about it)

6. Using storytelling to promote evidence use

This is increasingly a big interest for me. Storytelling is key to the effective conduct and communication of scientific research. Let’s not pretend we’re objective people just stating the facts (which is the least convincing story of all).

Combine Good Evidence and Emotional Stories to Change the World

Is politics and policymaking about sharing evidence and facts or telling good stories? Two very silly examples from #SP16

7. The major difficulties in using evidence for policy to reduce inequalities

These posts show how policymakers think about how to combine (a) often-patchy evidence with (b) their beliefs and (c) an electoral imperative to produce policies on inequalities, prevention, and early intervention. I suggest that it’s better to understand and engage with this process than complain about policy-based-evidence from the side-lines. If you do the latter, policymakers will ignore you.

What do you do when 20% of the population causes 80% of its problems? Possibly nothing.

The theory and practice of evidence-based policy transfer: can we learn how to reduce territorial inequalities?

How can you tell the difference between policy-based-evidence and evidence-based-policymaking?

Two myths about the politics of inequality in Scotland

Social investment, prevention and early intervention: a ‘window of opportunity’ for new ideas?

A ‘decisive shift to prevention’: how do we turn an idea into evidence based policy?

Can the Scottish Government pursue ‘prevention policy’ without independence?

All of this discussion can be found under the EBPM category: https://paulcairney.wordpress.com/category/evidence-based-policymaking-ebpm/T