This 500 Words version is a modified version of the introduction to chapter 9 in the 2nd edition of Understanding Public Policy. 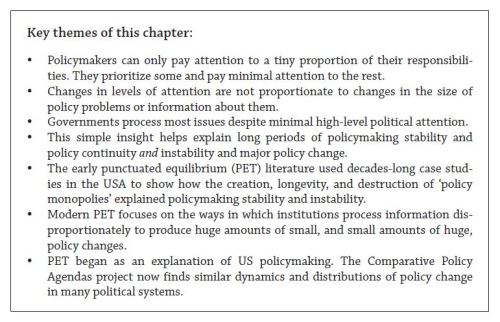 Punctuated equilibrium theory (PET) tells a story of complex systems that are stable and dynamic:

We can explain this dynamic with reference to bounded rationality: since policymakers cannot consider all issues at all times, they ignore most and promote relatively few to the top of their agenda.

This lack of attention to most issues helps explain why most policies may not change, while intense periods of attention to some issues prompts new ways to frame and solve policy problems.

Some explanation comes from the power of participants, to (a) minimize attention and maintain an established framing, or (b) expand attention in the hope of attracting new audiences more sympathetic to new ways of thinking.

Further explanation comes from policymaking complexity, in which the scale of conflict is too large to understand, let alone control.

The key focus is the competition to frame or define a policy problem (to exercise power to reduce ambiguity). The successful definition of a policy problem as technical or humdrum ensures that issues are monopolized and considered quietly in one venue. The reframing of that issue as crucial to other institutions, or the big political issues of the day, ensures that it will be considered by many audiences and processed in more than one venue (see also Schattschneider).

The modern PET story is about complex systems and attention.

Its analysis of bounded rationality and policymaker psychology remains crucial, since PET measures the consequences of the limited attention of individuals and organisations.

However, note the much greater quantification of policy change across entire political systems (see the Comparative Agendas Project).

PET shows how policy actors and organisations contribute to ‘disproportionate information processing’, in which attention to information fluctuates out of proportion to (a) the size of policy problems and (b) the information on problems available to policymakers.

It also shows that the same basic distribution of policy change – ‘hyperincremental’ in most cases, but huge in some – is present in every political system studied by the CAP (summed up by the image below) 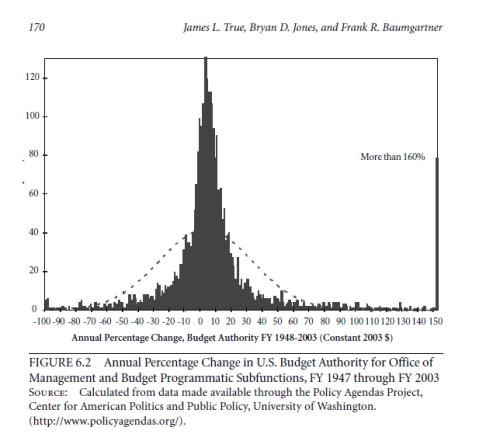