See also: Policy Concepts in 1000 Words: Context, Events, Structural and Socioeconomic Factors (you can hear my dulcet tones there, so I won’t do an extra podcast).

You get the idea by now. We began the course with a stylised Westminster model of centralised control and each week we use something new to chip away at that image. This week we focus on the sense that the UK government is (a) constantly responding to events rather than setting the political agenda, and (b) dealing with policy conditions and outcomes that seem to be out of its control.

You might get two impressions from the word ‘events’:

So, as we discussed in week 2, policymakers will often settle for the chance to portray themselves as decisive in responding and adapting to such events rather than controlling them (perhaps particularly in an age in which they struggle more and more to control the flow of information within populations).

A reference to policy ‘conditions’ or ‘environments’ is broader. It refers to the context in which policymakers make choices, including:

One main connection between conditions and events is that the former often shape the latter: environmental crises prompt new forms of behaviour, ageing populations prompt a sense of crisis in health and social care, economic downturns panic governments, and so on. You get the idea: this is a far cry from our initial starting point in which we focus on what governments do. If we focus on what surrounds governments we get more of a sense of the limits to what governments can do, and a limited sense of their control of policymaking processes and outcomes.

As the language of ‘structure and agency’ suggests, we need to find a convincing way to describe this sense of limited choice. We (or, at least, I) want to maintain the sense that policymakers are actors making choices but that some choices are far more attractive or possible than others.

So, we have a choice about how to portray these choices. On the one hand, we have accounts which focus on the limits to choice:

On the other hand is the sense that actors mediate such conditions and events: to a large extent they decide how to interpret events, the importance to attach to policy conditions, and which conditions produce events that seem the most urgent or important. In other words, many governments have shown an impressive ability to completely ignore events that other governments would treat as urgent crises.

The latter point is a nice segue to one of the recommended articles for this week, by Hindmoor and McConnell, in which they discuss the UK Government’s response to financial crisis. They remind us that we should understand the processing of events as they occurred, rather than via hindsight. This approach allows us to see that governments have highly imperfect ways to gather information and detect ‘warning signals’ effectively: what seems obvious now would not be obvious then. What now seems like a crisis to which governments inevitably had to respond would then seem very different.

In our groups we can identify and discuss key examples: how have UK governments dealt with demographic change or economic crisis? What kinds of factors are most likely to get their attention (and why?) and how are they likely to deal with them? What are the big events or conditions in UK politics that seem impossible to ignore? And what does our discussion tell us about the idea of a UK political system characterised by central government control and a centralisation of power.

We need a way to describe the things that policymakers take into account when they make decisions. We also need a way to categorise these things in order of importance, from factors that simply catch their eye, to factors that seem to be out of their control and/ or force them into making particular choices.

For example, ‘policy context’ or ‘structural factors’ may be used to describe the extent to which a policymaker’s ‘environment’ is in her control. It can refer to the policy conditions that policymakers take into account when identifying problems and deciding how to address them, such as a political system’s: geography, demographic profile, economy, and mass social attitudes and behaviour. 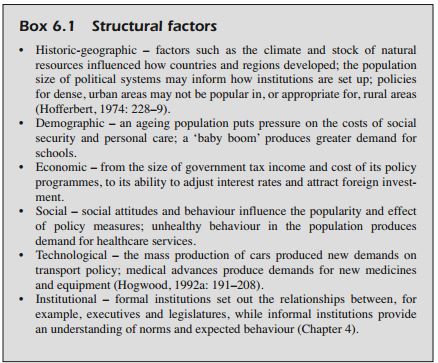 Or, we might refer to‘events’, which can be: routine, such as the elections, or unanticipated incidents, including social or natural crises, major scientific breakthroughs and technological change (see Weible).

Or, we might refer to policymaker ‘inheritance’ – of laws, rules, and programs (Rose, 1990). The first thing that a new government does is accept responsibility for the decisions made in its name in the past. New policymakers also realise that they are engaging in governing organisations which often have well-established rules, to which they either have to adapt or expend energy to challenge.

Our challenge is to find a way to incorporate these factors into a convincing account of policymaking. The policy sciences face the same problem as the social sciences: how to conceptualise the relationship between ‘structure’ and ‘agency’. Or, how much do policymakers shape, and how much of their behaviour is shaped by, their policy environment?

The term ‘structure’ refers vaguely to a set of parts put together to form a whole. In social science, we attribute two key properties to structures: they are relatively fixed and difficult but not impossible to break down; and, they influence the decisions that actors (‘agents’) make. For example, it is common to describe the structure of the economy, rules within institutions, government, and even some ideas.

From this starting point, we can identify agency-heavy and structural-heavy explanations. For the latter, one common solution is to focus on how actors interpret and respond to context and events. If so, we might consider if an event is only significant if actors within political systems pay attention to it.

This approach may contrast with socioeconomic-driven accounts which suggest that demographic, economic and other factors determine: which issues reach the policymaking agenda; which solutions seem feasible; the actors that policymakers try most to please; and, the likely success of any action.

For example, some studies from the 1960s examined the extent to which variations in policies across US states were explained by the socio-economic composition of each state. Similarly, Hofferbert’s (1974) ‘funnel of causality’ gives the impression that historic-geographic conditions contribute to the socio-economic composition of a region, which contributes to mass political behavior which determines the fortunes of parties – and all three combine with government institutions to influence elite behaviour.

Perhaps the most recent exposition of a structure-heavy account is summed up in the phrase ‘globalisation’ which describes the diminished ability of governments to control their own economic and monetary policies. Governments appear to be forced to ‘race to the bottom’; to compete economically, react to widespread shifts and crises in international financial conditions and change to attract business from multi-national corporations (often by reducing corporation taxes and labour regulations).

Structural versus comprehensive rationality based explanations?

This discussion prompts us to consider a different perspective to comprehensively rational decision making, or the idea that the policy process begins with the decision by a policymaker to identify a problem to solve. Instead, we may envisage a world in which policies are already in place and the ability of policymakers to replace them are limited. This decision-making process takes place within the context of existing government policy and a huge infrastructure devoted to carrying it out. Further, policymakers often define problems after events have taken place; those events may be out of the control of policymakers and often appear to give them very little choice about how, if it is possible, to solve them.

One way to describe this process is to suggest that policymakers represent one small part of a large complex system. Complexity theory suggests that we shift our analysis from individual parts of a political system to the system as a whole; as a network of elements that interact and combine to produce systemic behaviour that cannot be broken down into the actions of its constituent parts. This idea of a system captures the difficulty of policymaking and serves as a corrective to accounts that focus too much on the importance of individual policymakers and which exaggerate their ability to single-handedly change policy.

Of course, we do not want to go too far; to suggest that people don’t matter. So, a sensible approach is to think in terms of a structure–agency mix:

A final sensible solution is to not worry too much about what we call the solution. In my day, there was a lot of humming and hawing about Gidden’s ‘two sides of the same coin’ description of actors and structures, but I don’t remember anything being resolved.