Let’s begin with its positive role in analysis, then use policy studies to help qualify its role within policymaking environments. 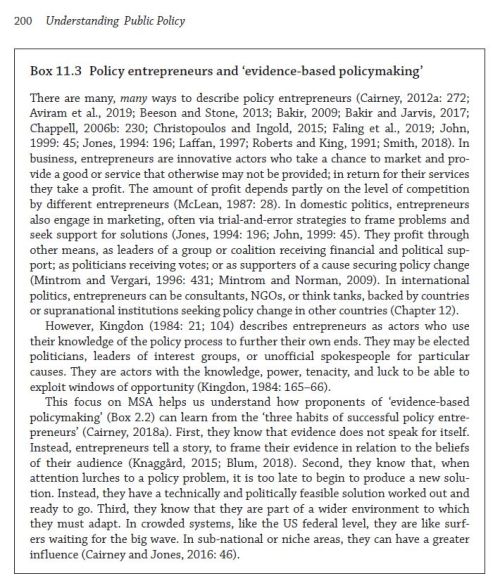 Mintrom identifies the intersection between policy entrepreneurship and policy analysis, to highlight the benefits of ‘positive thinking’, creativity, deliberation, and leadership.

He expands on these ideas further in So you want to be a policy entrepreneur?:

“Policy entrepreneurs are energetic actors who engage in collaborative efforts in and around government to promote policy innovations. Given the enormous challenges now facing humanity, the need is great for such actors to step forward and catalyze change processes” (Mintrom, 2019: 307).

Although many entrepreneurs seem to be exceptional people, Mintrom (2019: 308-20) identifies:

Overall, entrepreneurship is ‘tough work’ requiring ‘courage’, but necessary for policy disruption, by: ‘those who desire to make a difference, who recognize the enormous challenges now facing humanity, and the need for individuals to step forward and catalyze change’ (2019: 320; compare with Luetjens).

It is common to relate entrepreneurship to stories of exceptional individuals and invite people to learn from their success. However, the logical conclusion is that success is exceptional and most policy actors will fail.

A focus on key skills takes us away from this reliance on exceptional actors, and ties in with other policy studies-informed advice on how to navigate policymaking environments (see ‘Three habits of successful policy entrepreneurs’, these ANZSOG talks, and box 6.3 below)

However, note the final sentence, which reminds us that it is possible to invest a huge amount of time and effort in entrepreneurial skills without any of that investment paying off.

The other side of the entrepreneurship coin is the policymaking environment in which actors operate.

Policy studies of entrepreneurship (such as Kingdon on multiple streams) rely heavily on metaphors on evolution. Entrepreneurs are the actors most equipped to thrive within their environments (see Room).

However, Kingdon uses the additional metaphor of ‘surfers waiting for the big wave’, which suggests that their environments are far more important than them (at least when operating on a US federal scale – see Kingdon’s Multiple Streams Approach).

Entrepreneurs may be more influential at a more local scale, but the evidence of their success (independent of the conditions in which they operate) is not overwhelming. So, self-aware entrepreneurs know when to ‘surf the waves’ or try to move the sea.

Many studies of entrepreneurs highlight the stories of tenacious individuals with limited resources but the burning desire to make a difference.

The alternative story is that political resources are distributed profoundly unequally. Few people have the resources to:

If you want to see me say these depressing things with a big grin: