Policy Analysis in 750 Words: what you need as an analyst versus policymaking reality

This post forms one part of the Policy Analysis in 750 words series overview. Note for the eagle eyed: you are not about to experience déjà vu. I’m just using the same introduction.

The lines between each approach are blurry, and each element makes less sense without the other. However, the distinction is crucial to help us overcome the major confusion associated with this question:

Does policymaking proceed through a series of stages?

The short answer is no.

The longer answer is that you can find about 40 blog posts (of 500 and 1000 words) which compare (a) a stage-based model called the policy cycle, and (b) the many, many policy concepts and theories that describe a far messier collection of policy processes. 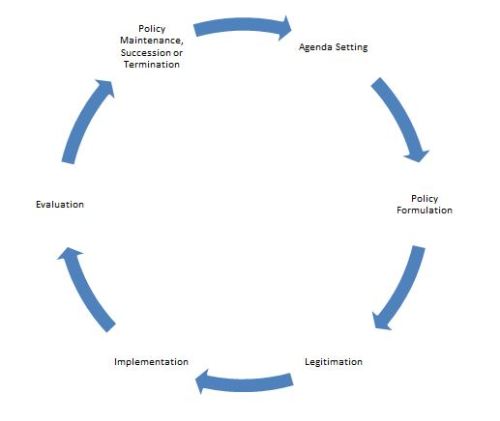 In a nutshell, most policy theorists reject this image because it oversimplifies a complex policymaking system. The image provides a great way to introduce policy studies, and serves a political purpose, but it does more harm than good:

In another nutshell, Chris Weible and I argue (in a secret paper) that the stages approach represents a good idea gone wrong:

In other words, if you take Lasswell’s list of what policy analysts/ policymakers need to do, multiple it by the number of actors (spread across many organisations or venues) trying to do it, then you get the multi-centric policy processes described by modern theories. If, instead, you strip all that activity down into a single cycle, you get the wrong idea.

This description should seem familiar, because the classic policy analysis texts appear to describe a similar series of required steps, such as:

However, these texts also provide a heavy dose of caution about your ability to perform these steps (compare Bardach, Dunn, Meltzer and Schwartz, Mintrom, Thissen and Walker, Weimer and Vining)

In addition, studies of policy analysis in action suggest that:

should not be confused with

What you need versus what you can expect

Of course, I am not about to provide you with a solution to these problems.

Still, this discussion should help you worry a little bit less about the circular arguments you will find in key texts: here are some simple policy analysis steps, but policymaking is not as ‘rational’ as the steps suggest, but (unless you can think of an alternative) there is still value in the steps, and so on.

‘Whether you are a policy analyst, a policy researcher, a policy advocate, a policy maker, or an engaged citizen, my hope for Policy Paradox is that it helps you to go beyond your job description and the tasks you are given – to think hard about your own core values, to deliberate with others, and to make the world a better place’ (Stone, 2012: 15)

Stone (2012: 379-85) rejects the image of policy analysis as a ‘rationalist’ project, driven by scientific and technical rules, and separable from politics. Rather, every policy analyst’s choice is a political choice – to define a problem and solution, and in doing so choosing how to categorise people and behaviour – backed by strategic persuasion and storytelling.

Stone (2012: 2-3) describes the ways in which policy actors compete to define policy problems and public policy responses. The ‘paradox’ is that it is possible to define the same policies in contradictory ways.

‘Paradoxes are nothing but trouble. They violate the most elementary principle of logic: something can’t be two different things at once. Two contradictory interpretations can’t both be true. A paradox is just such an impossible situation, and political life is full of them’ (Stone, 2012: 2).

This paradox does not refer simply to a competition between different actors to define policy problems and the success or failure of solutions. Rather:

Like many posts in this series (Smith, Bacchi, Hindess), Stone (2010: 9-11) rejects the misguided notion of objective scientists using scientific methods to produce one correct answer (compare with Spiegelhalter and Weimer & Vining). A policy paradox cannot be solved by ‘rational, analytical, and scientific methods’ because:

Further, Stone (2012: 10-11) rejects the over-reliance, in policy analysis, on the misleading claim that:

Rather, many factors undermine such simplicity:

Stone (2012: 14) identifies the ambiguity of the criteria for success used in 5-step policy analyses. They do not form part of a solely technical or apolitical process to identify trade-offs between well-defined goals (compare Bardach, Weimer and Vining, and Mintrom). Rather, ‘behind every policy issue lurks a contest over conflicting, though equally plausible, conceptions of the same abstract goal or value’ (2012: 14). Examples of competing interpretations of valence issues include definitions of:

Actors use policy-relevant stories to influence the ways in which their audience understands (a) the nature of policy problems and feasibility of solutions, within (b) a wider context of policymaking in which people contest the proper balance between state, community, and market action. Stories can influence key aspects of collective action, including:

Key elements of storytelling include:

This post connects to several other 750 Words posts, which suggest that facts don’t speak for themselves. Rather, effective analysis requires you to ‘tell your story’, in a concise way, tailored to your audience.

For example, consider two ways to establish cause and effect in policy analysis:

One is to conduct and review multiple randomised control trials.

Another is to use a story of a hero or a villain (perhaps to mobilise actors in an advocacy coalition).

Stone (2012: 10) argues that analysts who try to impose one worldview on policymaking will find that ‘politics looks messy, foolish, erratic, and inexplicable’. For analysts, who are more open-minded, politics opens up possibilities for creativity and cooperation (2012: 10).

This point is directly applicable to the ‘politics of evidence based policymaking’. A common question to arise from this worldview is ‘why don’t policymakers listen to my evidence?’ and one answer is ‘you are asking the wrong question’.

People communicate meaning via stories. Stories help us turn (a) a complex world, which provides a potentially overwhelming amount of information, into (b) something manageable, by identifying its most relevant elements and guiding action (compare with Gigerenzer on heuristics).

The Narrative Policy Framework identifies the storytelling strategies of actors seeking to exploit other actors’ cognitive shortcuts, using a particular format – containing the setting, characters, plot, and moral – to focus on some beliefs over others, and reinforce someone’s beliefs enough to encourage them to act.

Compare with Tuckett and Nicolic on the stories that people tell to themselves.