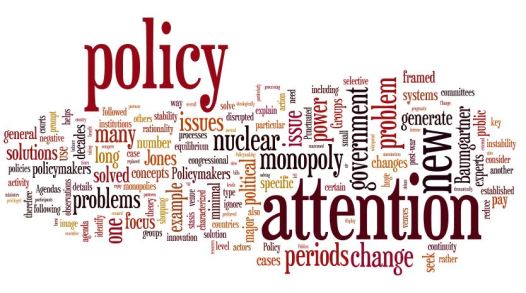 Policymaking can appear stable for long periods, only to be destabilised profoundly. Most policies can stay the same for long periods while a small number change quickly and dramatically. Or, policy change in one issue may be minimal for decades, followed by profound change which sets policy on an entirely new direction. The aim of Baumgartner and Jones’ punctuated equilibrium theory is to measure and explain these long periods of policymaking stability, and policy continuity, disrupted by short but intense periods of instability and change. The key concepts are:

Bounded rationality. Policymakers cannot consider all problems and their solutions at all times. For example, government ministers can only pay attention to a tiny proportion of the issues for which they are responsible. They ignore most and promote few to the top of their agenda.

Disproportionate attention. Policymakers often ignore issues or pay them an unusual amount of attention. The lack of attention to most issues helps explain why most policies may not change. Intense periods of attention to some issues may prompt new ways to understand and seek to solve old problems.

Power and agenda setting. Some groups try to maintain their privileged position by minimizing attention to the policy solutions which benefit them. Others seek to expand attention, to encourage new audiences and participants, to generate debate and new action.

Framing. Groups compete to influence how a problem is framed (understood, defined, categorized and measured) and therefore solved by policymakers. For example, it may be framed as a problem that has largely been solved, leaving the technical details of implementation to experts, or a crisis which should generate widespread attention and immediate action.

Policy monopolies. Groups may enjoy a ‘monopoly of understanding’ when policymakers accept their preferred way to frame an issue for long periods, perhaps even taking it for granted. This monopoly may be ‘institutionalised’ when rules are created and resources devoted to solving the policy problem on those terms.

Venue shopping. To challenge a monopoly in one venue (such as the executive, or one type of government at a particular level), groups may seek an audience in another (such as the legislature, the courts, or another type or level of government).

In Agendas and Instability (1993; 2009), Baumgartner and Jones, use a case study approach to examine these processes in detail. For example, in postwar US nuclear power, they identify a period of major public attention, focused on the pressing need to solve a policy problem, followed by minimal attention – for decades – when the problem appeared to be solved. The government inspired public enthusiasm for nuclear power as a solution to several problems – including the need to reduce energy bills, minimise dependence on other countries for oil, reduce air pollution, and boost employment and economic activity. This positive image, and general sense that the policy problem was solved, supported the formation of a post-war policy monopoly involving the experts implementing policy. Public, media and most government attention fell and the details of policy were left to certain (mainly private sector) experts, federal agencies and congressional committees. The monopoly was only challenged in the 1970s following environmental activist and scientific concern about nuclear safety. Groups used this new, negative, portrayal of the nuclear solution to generate concerned interest in new venues, including the courts, congressional committees and, particularly following a major accident at Three Mile Island, the public. The policy monopoly – the way in which nuclear power was framed, and the institutions established to implement policy – was destroyed.  Then, a new, negative, image became dominant for decades – and a post-war policy of power plant expansion was replaced by a moratorium and increased regulation. Only recently has the resurgence of nuclear power become a serious possibility.

In The Politics of Attention (2005), Jones and Baumgartner’s focus shifts to more general observations of selective attention (they highlight over ‘400,000 observations collected as part of the Policy Agendas Project’). Policymakers are unwilling to focus on certain issues for ideological and pragmatic reasons (e.g. some solutions may be too unpopular to consider; there is an established view within government about how to address the issue). They are also unable to pay attention because the focus on one issue means ignoring 99 others. Change may require a critical mass of attention to overcome the conservatism of decision makers and shift their attention from competing problems. If levels of external pressure reach this tipping point, they can cause major and infrequent punctuations rather than smaller and more regular policy changes: the burst in attention and communication becomes self-reinforcing; new approaches are considered; different ‘weights’ are applied to the same types of information; policy is driven ideologically by new actors; and/or the ‘new’ issue sparks off new conflicts between political actors. Information processing is therefore characterized by ‘stasis interrupted by bursts of innovation’ and policy responses are unpredictable and episodic rather than continuous. One key example is the annual budget process which, like many other examples of political activity, does not display a ‘normal distribution’ of cases. Instead, it is characterized by a huge number of minimal changes and a small number of huge changes.

The trend in Baumgartner and Jones’ work has been to move from the specific to the ‘universal’; from some cases in one country to many cases in many countries. Their initial assumption was that many of the processes they observed in case studies resulted from the peculiarities of the US system. Yet, concepts such as bounded rationality, selective attention, policy monopolies and venue shopping should be applicable to all political systems. Punctuated equilibrium theory helps us to balance a focus on the specific and the general. We can use these concepts to generate empirical questions about why the policymakers, institutions and venues of specific political systems prompt particular problems and solutions to be addressed and others to be ignored. We can also use them to identify the same overall patterns – based on a mixture of stasis, stability and continuity disrupted by innovation, instability, and change – in many systems.

To read more, click here to get a Green Access version of chapter 9 of this book discussed here.