Public Lecture: ‘Will life go on after the Scottish Independence referendum?’

Update: the audio of the lecture is available here:

and the sense of occasion is picked up here: 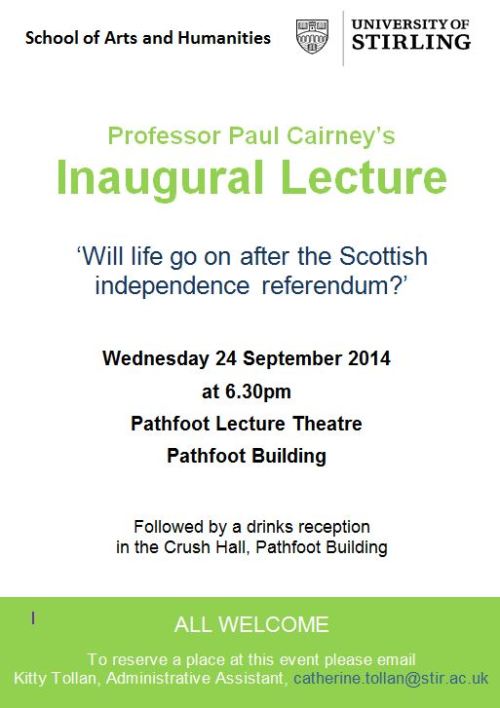 I will give my inaugural lecture on Wednesday 24 September 2014 at the University of Stirling. The lecture is called ‘Will life go on after the Scottish Independence referendum?’, which is as sarcastic as I felt I could get away with without putting people off. It’s a public lecture, so anyone willing to make the trip is more than welcome. I’ll be wearing ceremonial robes, but you can do smart casual or sports casual. It starts at 6.30pm, in the Pathfoot Lecture Theatre (the first building, on the left, as you enter the campus: enter and go straight ahead, then go up the stairs and listen out for the live music and cheers). It ends, I think, at 7.30pm, followed by a drinks reception. I don’t drink, so I can’t tell you if the free booze makes the trip worthwhile. My mum is making the trip from Reading, so think about that if you live in the central belt and can’t be arsed. My partner and kids are also going, so we’re going to hang around enough to answer questions and be polite, then nip away for dinner and high 5s when no-one is looking.

The official advice is that ‘If you would like to attend then please RSVP by Wednesday 17 September 2014: catherine.tollan@stir.ac.uk‘ but there is no-one there to keep non-RSVPers out and I will eat my hat if the lecture is full. In fact, you’d be doing me a favour by just turning up, wearing Homer Simpson specs and falling asleep.

This is what I’ve said I’ll talk about:

‘Will life go on after the Scottish Independence referendum?’

The lecture discusses the future of Scotland’s political system after the independence referendum. It touches upon the referendum campaigns and the immediate impact of a yes or no vote, but focuses on the aspects of politics and policymaking that are relatively unaffected by the result, including: the presence of ‘wicked’ policy problems that all governments struggle to solve; the tendency for the public to focus on salient political issues at the expense of most government activity; and, the often-peripheral role of the MSPs we elect to the Scottish Parliament. Regardless of the vote, we will continue to focus on one small, simple, part of the political process (including elections), often ignoring the complex problems that policymakers face, and remaining unaware of the complex policy processes in which they operate. How is policy made under those circumstances – and should you pay attention?

3 responses to “Public Lecture: ‘Will life go on after the Scottish Independence referendum?’”