The role of HM Treasury and the ‘Barnett formula’ #POLU9SP

Q: why has the ‘Barnett formula’ endured for decades as a political solution despite being so heavily criticized?

A: it suits both governments because it turns potentially controversial funding negotiations into a routine and humdrum process that normally takes place out of the public spotlight. 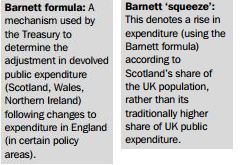 Think back to our previous lecture which explained why IGR is so smooth and informal:

The ‘Barnett formula’ is one of the best examples: the Treasury is the more powerful actor, but it has long accepted the use of a formula which appears to entrench Scotland’s advantageous funding settlement within the UK. It has the power to change the way in which it distributes territorial funding, but no alternative policy offers enough of an economic or political benefit to make up for the fallout from the opposition in Scotland to a major reduction of Scottish Government funding.

But what is the Barnett formula?

Here is a quick description. There is a longer description (and a list of further reading) in Scottish Politics.

The formula only relates to changes in the level of spending. It is based on an estimate of populations within the UK. Initially this was a 10–5–85 split for Scotland, Wales and England which suggested that Scotland would receive 10/85 of any increase in comparable spending for England by UK Government departments (or lose the same amount if spending fell). This comparability varies according to department. While some are almost fully devolved (e.g. Health, Education), others are partly devolved (e.g. Transport) and only the comparable spending will be applied to Scotland.

So, ‘Barnett consequentials’ (how much does the relevant Scottish Government budget change when spending for England changes?) are based on three estimates:

This final point is at the heart of a lot of futile debate on the extent to which Scottish Government spending on salient areas – such as the NHS – can/ does/ should rise at the same rate as spending rises in England because:

If the Barnett formula is working as allegedly intended it should not be possible for the Scottish Government to keep up (with a proportionate real rise in spending) without finding money from elsewhere.

What is the Barnett Formula allegedly supposed to do?

I say ‘allegedly’ because people have been piecing together the history of Barnett, and not everyone agrees on its primary function. 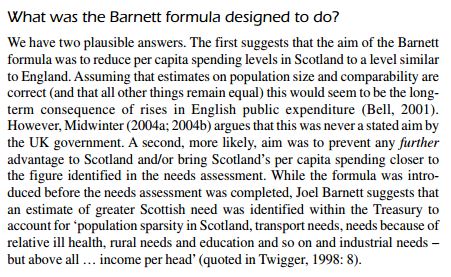 What we can say for sure is that – ‘all other things remaining equal’ (ceteris paribus) – the consequence of extra spending in England is extra spending in Scotland according to its estimated share of the population rather than its traditionally higher share of UK public expenditure (the latter is sometimes estimated at 20% per head higher than in England).

Yet, the ‘Barnett squeeze’ didn’t happen as much or as quickly as we might expect because:

Further, Scotland’s higher per capita spending is often maintained by UK Government spending that is not covered by the formula, in areas such as social security and agriculture. 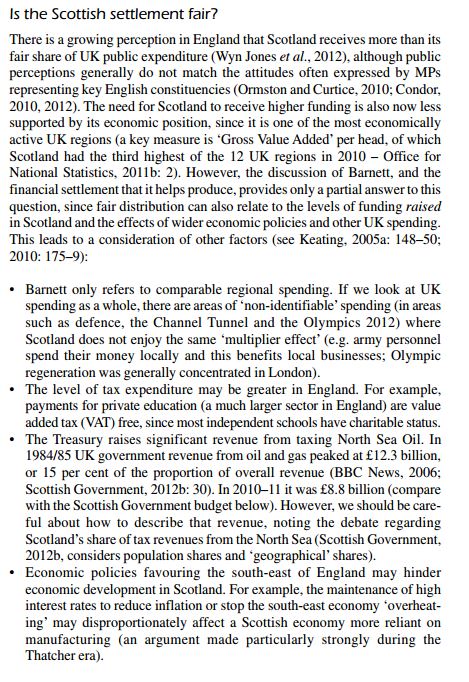 Why has Barnett not been replaced by something more sensible?

The Barnett formula has stood the test of time despite repeated calls for its replacement. We can talk about two key explanations:

What does this experience tell us about bigger issues of power and IGR?

Barnett is a good example of an effective IGR mechanism in the often-distinctive UK tradition: it helps maintain smooth governmental relations by using a routine measure to make big decisions. The Treasury has the power to change it, and to give the Scottish Government a smaller settlement, but it chooses to stick with a formula that suits both governments in important ways.

We can see a similar mix of power and flexibility in a broader discussion of their relationship:

When you put those statements together, you find some uncertainty about Scottish Government discretion:

Further, the UK Government still makes the big decisions on how to deal with ‘austerity’ and, for example, how to reform social security spending.

In the next lecture, we can discuss how forthcoming constitutional changes may affect this relationship.