My name is Paul Cairney (click here to hear how to pronounce it) (click for bio) and I am Professor of Politics and Public Policy at the University of Stirling. Please scroll down this page for a full list of my publications (usually with links to the full text). 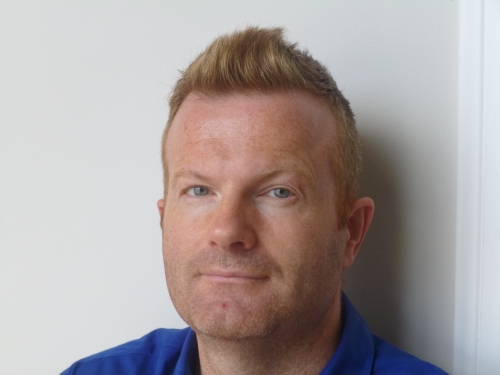 Three kinds of bio for talks:

2. “Paul Cairney is Professor of Politics and Public Policy, University of Stirling, UK (@Cairneypaul).  His research interests are in comparative public policy. His research spans comparisons of policy theories (Understanding Public Policy, 2020), and co-authored accounts of methods associated with key theories (Handbook of Complexity and Public Policy, 2015), international policy processes (Global Tobacco Control, 2012), and comparisons of UK and devolved policymaking (Why Isn’t Government More Preventive?, 2020). He uses these insights to explain the use of evidence in policy and policymaking, in one book (The Politics of Evidence-Based Policy Making, 2016), several articles, and many, many blog posts: https://paulcairney.wordpress.com/ebpm/ If you only have time for one article, make it How to communicate effectively with policymakers. Cairney was funded (2013-15) by the UK Economic and Social Research Council to compare policymaking processes in the UK and Scottish governments, focusing on areas such as prevention, and as part of the UKERC programme (2018) analysing multi-level energy policy and energy systems. He is currently funded by the European Research Council’s Horizon 2020 programme ‘IMAJINE’ to understand how to learn from – and transfer within the European Union – policies designed to reduce inequalities”.

2. “I am an expert in politics and public policy. I combine insights from policymaking research and work with many different people to apply these insights to real world problems.

In doing so, I am struck by the difference between my understanding of policymaking and the perspectives of my colleagues. Their expectations for policymaking seem relatively high, with a much greater potential for disappointment. When I work with colleagues in fields such as public health or climate change, they wonder why policymakers seem to ignore their evidence. In contrast, I assume that policymakers must find efficient ways to ignore almost all information, to make timely choices. When I work with policy practitioners, or groups seeking to influence policy, they often wonder why government policy seems to be a reaction to acute problems, rather than preventing them before they arise. In contrast, I assume that policymakers operate in a policymaking environment over which they have limited knowledge and even less control. Policymakers may want to gather a large amount of policy-relevant evidence and design a more effective system, but find themselves unable to know where to start.

For me, these limits prompt us to ask questions about how to engage with policymakers: should policy analysts propose ambitious long-term reforms, to help reduce inequalities and improve the lives of marginalised groups, or stick to what is technically and politically feasible in the short-term? Should we hold governments to account for their formal responsibilities, statements of intent, and policy outcomes, or in relation to what they can actually do? One person could not answer such questions alone. Instead, I offer the combination of insights from policymaking research to give us a language and way of thinking about policy problems, and to encourage learning between citizens, practitioners, and policymakers.

I have been funded by many organisations to produce and share these insights, including: Horizon2020 funding for the IMAJINE project to foster policy learning, social justice, and reduce inequalities; Economic and Social Research Council funding for the Centre on Constitutional Change to compare how UK and devolved governments seek ‘preventive’ policymaking (see Why Isn’t Government Policy More Preventive? Co-authored with Dr Emily St Denny, Oxford University Press); and UKERC Theme 3 on the impact of Brexit on energy policy and policymaking. The total funding for these projects is approximately £7m, with approximately £750,000 administered at Stirling.

I have written 12 books (including The Politics of Evidence-Based Policymaking), 85 articles in international peer reviewed journals, and 31 chapters in edited books. The full list is on my website https://paulcairney.wordpress.com/cv/ and Google Scholar page (h=48, citations 8460 on 16.11.21, which is quite good if you’re not Marx, Foucault, or part of a STEM superstar DJ collective).

I supervise PhDs on policy, and run the University of Stirling’s Master of Public Policy. My commitment to learning includes a major investment in my book Understanding Public Policy, which combines insights from many policy theories, and website, which includes 1000 and 500 word summaries of key concepts, and 750 word summaries of texts and themes in policy analysis. This site now attracts 250,000 hits per year, with a total of 1.3m since 2014″. 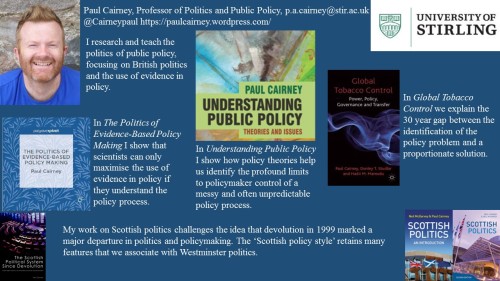 Examples of Other Activities