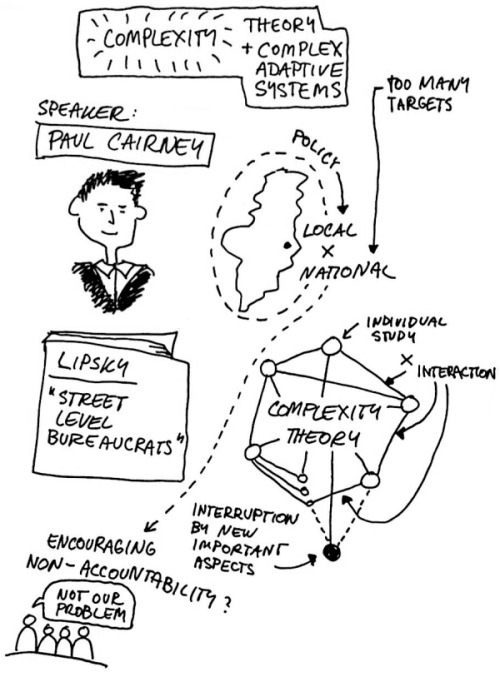 There is an unnecessary tendency for proponents of complexity theory to say that it is radically new; a scientific revolution; that it will change the way we think about, and study, the natural and social world. It suggests that we shift our analysis from individual parts of a system to the system as a whole; as a network of elements that interact and combine to produce systemic behaviour that cannot be broken down merely into the actions of its constituent parts. The metaphor of a microscope or telescope, in which we zoom in to analyse individual components or zoom out to see the system as a whole, sums up this alleged shift of approach.

Complexity theory has been applied to a wide range of activity, from the swarming behaviour of bees, the weather and the function of the brain, to social and political systems.  The argument is that all such systems have common properties, including:

As you might expect from a theory of many things, the language is vague and needs some interpretation in each field. In the policymaking field, the identification of a complex system is often used to make the following suggestions:

On this basis, there is a tendency in the literature to encourage the delegation of decision-making to local actors:

In other words, this literature, when applied to policymaking, tends to encourage a movement from centrally driven targets and performance indicators towards a more flexible understanding of rules and targets by local actors who are more able to understand and adapt to rapidly-changing local circumstances.

Although complexity theory is described as new, these are familiar arguments in policy studies. Relevant texts in the policymaking literature include punctuated equilibrium theory, historical institutionalism and the following:

Lipsky’s idea of ‘street level bureaucracy’. He suggests that there are so many targets, rules and laws that no public agency or official can be reasonably expected to fulfil them all.  In fact, many may be too vague or even contradictory, requiring ‘street level bureaucrats’ to choose some over others.  The potential irony is that the cumulative pressure from more central government rules and targets effectively provides implementers with a greater degree of freedom to manage their budgets and day-to-day activities. Alternatively, central governments must effectively reduce their expectations by introducing performance measures which relate to a small part of government business (see this discussion of Street Level Organizations https://paulcairney.wordpress.com/2013/09/09/street-level-bureacrats/).

Hjern’s focus on intra-departmental conflict, when central government departments pursue programmes with competing aims, and interdependence, when policies are implemented by multiple organizations. Programmes are implemented through ‘implementation structures’ where ‘parts of many public and private organizations cooperate in the implementation of a programme’. Although national governments create the overall framework of regulations and resources, and there are ‘administrative imperatives’ behind the legislation authorizing a programme, the main shaping of policy takes place at local levels.

Governance.  A lack of central control has prompted governments in the past to embrace New Public Management (NPM) and seek to impose order through hierarchy and targeting. However, local implementation networks (with members from the public, third and private sectors) have often proved not be amenable to such direct control.

Lindblom’s discussion of incrementalism in 1959: ‘Making policy is at best a very rough process. Neither social scientists, nor politicians, nor public administrators yet know enough about the social world to avoid repeated error in predicting the consequences of policy moves. A wise policy-maker consequently expects that his policies will achieve only part of what he hopes and at the same time will produce unanticipated consequences he would have preferred to avoid. If he proceeds through a succession of incremental changes, he avoids serious lasting mistakes’ (or she/ her).

Consequently, we should reject the idea of theoretical novelty for novelty’s sake. The value of complexity theory is not that it is trendy – it is that it allows us to use our knowledge of the natural and social world to understand and influence real world problems.

Where do we go from here?

Empirical issues: How does ‘complexity thinking’ improve our understanding of politics and policymaking?