The role of ‘standards for evidence’ in ‘evidence informed policymaking’

I once spoke with a policymaker from a health unit who described the unintended consequences of their self-imposed evidence standards. They held themselves to such a high standard of evidence that very few studies met their requirements. So, they often had a very strong sense of ‘what works’ but, by their own standards, could not express much confidence in their evidence base.

As a result, their policy recommendations were tentative and equivocal, and directed at a policymaker audience looking for strong and unequivocal support for (often controversial) policy solutions before putting their weight behind them. Even if evidence advocates had (what they thought to be) the best available evidence, they would not make enough of it. Instead, they value their reputations, based on their scientific integrity, producing the best evidence, and not making inflated claims about the policy implications. Let’s wait for more evidence, just to be sure. Let’s not use suboptimal evidence, even if it’s all we have.

I say this because I have attended many workshops, in the last year, in which we discuss principles for science advice and guidelines or standards for the evidence part of ‘evidence-based’ or ‘evidence-informed’ policymaking.

During such discussions, it is common for people to articulate the equivalent of crossing their fingers and hoping that they can produce rules for the highest evidence standards without the unintended consequences. If you are a fan of Field of Dreams, we can modify the slogan: if you build it (the evidence base), they will come (policymakers will use it sincerely, and we’ll all be happy).*

Or, if you are more of a fan of Roger Pielke Jr, you can build the evidence base while remaining an ‘honest broker’, providing evidence without advocacy. Ideally, we’d want to maintain scientific integrity and have a major impact on policy (akin to me wanting to eat chips all day and lose weight) but, in the real world, may settle for the former.

If so, perhaps a more realistic way of phrasing the question would be: what rules for evidence should a small group of often-not-very-influential people agree among themselves? In doing so, we recognise that very few policy actors will follow these rules.

What happens when we don’t divorce a discussion of (a) standards of evidence from (b) the use of evidence for policy impact?

The latter depends on far more than evidence, such as the usual factors we discuss in these workshops, including trust in the messenger, and providing a ‘timely’ message.  Perhaps a high-standard evidence base helps the former (providing a Kite Mark for evidence) and one aspect of the latter (the evidence is there when you demand it). However, policy studies-inspired messages go much further, such as in Three habits of successful entrepreneurs which describes the strategies people use for impact:

In such cases, the availability of evidence becomes secondary to: 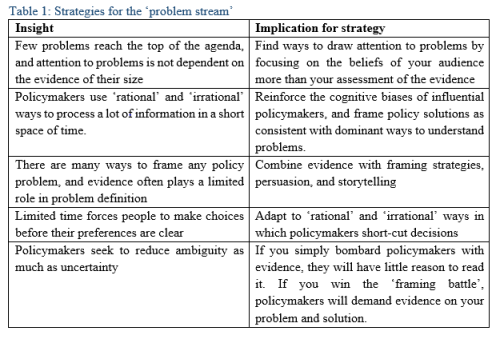 So, when we talk about any guidance for evidence advocates, such as pursued by INGSA, I think you will always find these tensions between evidence quality and scientific integrity on the one hand, and ‘timeliness’ or impact on the other. You don’t address the need for timely evidence simply by making sure that the evidence exists in a database.

I discuss these tensions further on the INGSA website: Principles of science advice to government: key problems and feasible solutions

*Perhaps you’d like to point out that when Ray Kinsella built it (the baseball field in his cornfield), he did come (the ghost of Shoeless Joe Jackson appeared to play baseball there). I’m sorry to have to tell you this, but actually that was Ray Liotta pretending to be Jackson.